Lets face it; everyone wants an awesome photo of themselves. Whether you’re traveling in Italy, exploring a new part of town, or you’re just really loving your outfit that day, there doesn’t have to be a reason to ask someone to take a photo of you. It’s 2019. We’re all self-absorbed. It’s whatever at this point. In this article, I’m going to address how to pose in photos.

BUT. It’s the absolute worst when you finally muster up the courage to strike a pose in the middle of the street, only to realize that you have literally no idea what you’re doing and instead of focusing on the dope picture you’re about to get, you just stare into the souls of the pedestrians passing by. And you end up looking like this:

So without further ado, here are five tips to keep in the back of your mind whenever you’re about to get your picture taken:

How to Pose Tip #1: Take up as much of the frame as possible #KillTheFrame

Think of yourself as the art within the picture frame in a museum. You don’t want to be standing there taking up as minimal space as possible because as a consequence, you will look small and powerless in the photo. Instead, by using your arms, legs, and posture to take up as much space around you as possible, you will mimic this sense of confidence and power, all while being aesthetically pleasing to the eye. Separating your limbs from your body will create a more powerful pose and photograph. In this photo below, I utilize the wall in order to spread myself out more and take up more width in the frame:

How to Pose Tip #2: Shift Your Weight

Have fun with this one. Try shifting your weight forward to look excited, as though you’re coming towards the camera, or shift your weight to the side to come across as “effortless” and carefree. Make sure to engage your core and pull your shoulders back so that you aren’t just sort of “flopping” around like a lifeless fish. Sort of like this:

How to Pose Tip #3: Find Out Your Angle

Look in the mirror and decide if you have a “side” you like or if you like photos taken straight on. If you aren’t too curvy, by leaning on one hip, you can provide some dimension on that side of your body, creating some faux curves. Personally, I think turning your body slightly to the side at about a 45 degree angle works best. However, I think the best advice is to always try to visualize an image that you want to recreate and think about the angles in that photo. How can you create similar angles with your body?

The same thing goes with sitting poses as well. Always try to create some sort of angle WITH your body, instead of taking the photo straight on. Your body is beautiful and interesting and a photo is so one-dimensional. The more angles and quirkiness you can show, the better.

How to Pose Tip #4: Create movement.

Some of my best performing photos of all time have some sort of movement in them. From an outside perspective, it is more entertaining to look at, while also providing an inside look into your personality. I’ve found that stagnant photos, while more posed, don’t really showcase who I am or show my personality. You can achieve a fun, movement photo by spinning in a circle, looking over your shoulder as you walk (slowly), or even just do a little dance. Chances are, you’re going to feel like a freak, but the worst that’s going to happen is you get a pretty awesome candid out of it. Don’t be afraid to be weird and/or smile and laugh while taking these types of photos; the Internet likes weird. Another idea is to create movement with your hair!

How to Pose Tip #5: Take better photos by grabbing onto something.

This is my go-to. If nothing is around me to use as a prop, or to lean against, it takes me a bit longer to feel comfortable with posing. Instead, find inspiration on a fancy fence, or stand behind a gate. Adding some dimension, while also being able to hold onto something will significantly impact a photo for the better. A lot of pressure will be relieved from you because you will be able to rely on other things in the photograph to tell a story, aside from just your body and facial expression. Aside from the fact that this takes tons of pressure off of you, I think it also makes a photo that much more interesting.

There are TONS of other tips that I could share, but for now, these are pretty much the basics that I seem to always remember when posing in a photo. Let me know if you found these tips helpful and if you’d like me to share more tips in the future! Now, get out there, experiment with different poses, and kill the frame.

Check out my Instagram page for some inspiration http://instagram.com/tori_nucci

Thanks for reading. Xx

SIDE NOTE! If you aren’t the best at editing photos, take a look at Tori Webb’s presets below that can be added as a filter to any of your photos!: 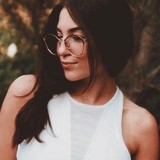 I'm a digital marketer with a background in social media marketing, especially Instagram marketing! I want to help others kill that social media game, while being authentic and true to self.

14 replies on “How to Pose: Five Posing Tips You Can Use to Kill the Frame”

[…] If you need some photo inspo, be sure to check out my post about how to pose in photos! […]

I love these tips! Thank you so much! I’m always trying to improve =)

Thank you so much for reading, Jacqueline! I’m always trying to improve myself 🙂

I just started putting myself in front of the camera, the first time was nerve-racking. I really enjoy your posing ideas thank you so much❤️

Aw, congrats! I always tell myself that these people have no idea who I am and I will never see them again. For all they know, you could be a famous model or reality star 🙂 Glad I could help you out a bit! Thanks so much for reading.

Thanks to the terrific guide

[…] Be sure to check out my How to Pose: Five Posing Tips You Can Use to Kill the Frame […]

I enjoy the article

Thank you so much, Barb!!

A little about me

Hi! I’m Tori and I’m a freelance content creator and blogger based in Los Angeles. My content niches include travel, fashion and lifestyle and my clients include brands such as Cupshe, Daze Denim, and Velvet Caviar.

I also do freelance marketing for social media and entertainment for large companies such as Netflix.

I’m passionate about helping other creators establish a brand in the microinfluencer industry and share tips and BTS of content creation on my TikTok @torinucci.

Through my blog and social media outlets, I assist other creators with my social media tips, while sharing travel + lifestyle inspo. I hope to see you there!

Check out my blog posts for travel guides, content creator tips, and more 🙂

Search for the goods: